One of the greatest defensive players of all time, Bill Russell revolutionized how basketball was played from a defensive standpoint. Russell, an 11-time champion and five-time MVP, was keen on blocking shots and snagging rebounds. Over his career, he amassed 21,620 rebounds, second in NBA history. But what’s more impressive is how Russell blocked his shots.

He used finesse, rather than force, to alter and block shots. Instead of swatting the ball into the stands, a crowd-pleasing display, Russell intentionally blocked or altered shots just enough so he or his teammates could corral the loose ball. This would send the Celtics off on the fast-break, changing the way basketball was played forever. 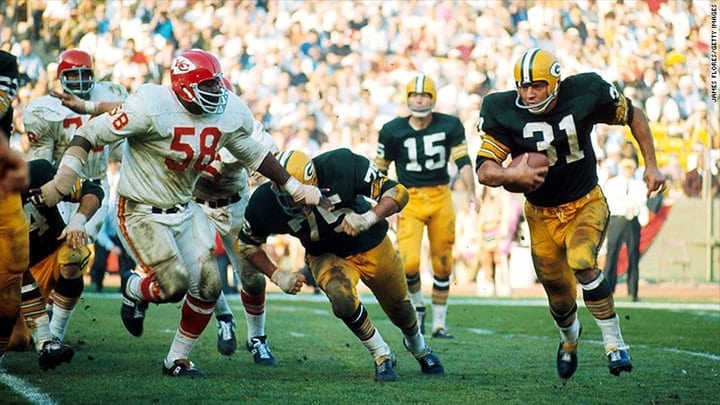 The first Super Bowl in NFL history was a match between the NFL’s Green Bay Packers and the AFL’s Kansas City Chiefs. The Pack won the highly-anticipated game 35-10, thanks to their strong offensive play and stout defense. This first Super Bowl was actually known as the AFL-NFL World Championship Game.

Running back Jim Taylor, pictured above, is shown leading the famous “power sweep,” the Packers’ most basic, and most unstoppable, running play in Vince Lombardi’s playbook. Taylor had 56 yards on the ground and one score as the Packers overwhelmed the inferior opponent from the upstart AFL. The Packers won 11 NFL Championships, two AFL-NFL Super Bowls, and two modern-day Super Bowls.