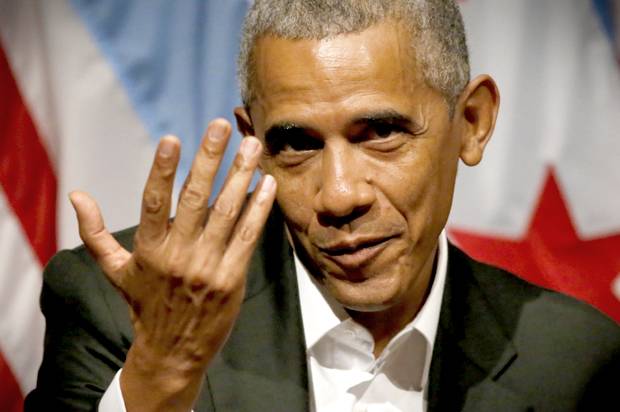 It’s presently been three months since Barack Obama left the White House, venturing out for an appearance at the A&E Network’s publicizing forthright in Manhattan. The previous president was met by presidential antiquarian Doris Kearns Goodwin at the occasion.

Goodwin asked Obama how he took care of the strained minutes when he was in office, flippantly answering, “for one thing, by not having a Twitter account.”

We as a whole understand this is a diss to Trump, who tweets like a high school young lady via web-based networking media. Many would contend that is not exceptionally ‘presidential conduct.’

Great to have you back on (the political) stage Mr. President #BarackObama #UniversityofChicago due to popular demand pic.twitter.com/RJIrPLMRwY

Many of you will recall that Trump has shared plenty of tweets about Obama, including where he accused the former President of wire-tapping. Back in March, Trump alleged that former Obama had the Trump Tower wire-tapped ahead of Election Day last year. He accused Obama of “McCarthyism” and being a “bad (or sick) guy.”

In August of 2016, Trump tweeted, “President Obama should have gone to Louisiana days ago, instead of golfing. Too little, too late!”

Trump tweeted out on May 2016, “While our wonderful president was out playing golf all day, the TSA is falling apart, just like our government! Airports a total disaster!”

Trump also once tweeted, “President Obama has a major meeting on the N.Y.C. Ebola outbreak, with people flying in from all over the country, but decided to play golf!”

In December 2014, the Don tweeted, “Obama has admitted that he spends his mornings watching @ESPN. Then he plays golf, fundraises & grants amnesty to illegals.”

Barack is doing just fine these days, stepping away with a whopping $400,000 paycheck for appearing at the A&E network’s event. Obama was said to have been welcomed by a standing ovation when he entered the room.

During his appearance, Barack said he still hasn’t been behind the wheel of a car and is learning how to operate their coffee machine at their Washington D.C. home.