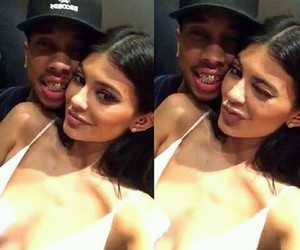 Tyga doesn’t seem particularly heartbroken. He’s been seen partying all over the country, often with a different, equally beautiful girl on his arm every night. He was even spotted partying in the same cities as ex Blac Chyna two weekends in a row.

In typical dude fashion, though, as soon as he gets a couple drinks in him, he starts missing his old boo. Kylie reportedly often wakes up to several messages; some begging her back, some angry at her, all thirst-induced.

The youngest sister in the Kardashian fam would love to delete and block her nuisance of an ex boyfriend and move on with her life, but she can’t, because of how much money he owes her. Kylie’s already been spotted with a new rapper, after all.

Kylie was spotted leaving rapper Travis Scott’s house last Wednesday, where the couple participated in some PDA. She had come over to visit for a couple hours, and as they said goodbye, Scott grabbed a couple handfuls.

The new couple was first spotted together at Coachella. Their relationship was thought to be primarily casual, but it looks as if things have been getting steadily more serious.