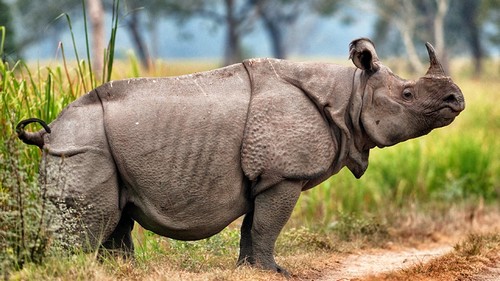 It is the rarest and most susceptible species of rhinos. With only approximately 60 of them remaining in the National Park of Ujung Kulonin Indonesia. The most recent rhino died in Vietnam in 2010. This rhino has only one horn which is around 10 inches. Its body is darkish gray in color. Its skin has several free folds making it look like a shield. The population of the rhinos is a major concern, and the small hereditary variety makes it very hard for them to continue being viable.

The main things that dangers the Javan rhino are; The major explosions of the Anak Krakatau volcano and the tsunamis that kill them in large numbers. Rhinos have also died from diseases in the recent years that are known to have been transmitted by the wild livestock. The WWF is keeping track of the rhinos and observes their movement, distribution, genetic diversity, sex ratio and their behavioral pattern. WWF also supports management of the environment in the national park of Ujung Kulon. The significant efforts concentrating on the removal of the Arenga palm an aggressive species that leaves the place unproductive of foods for the rhinos. It also supports anti-poaching guards.