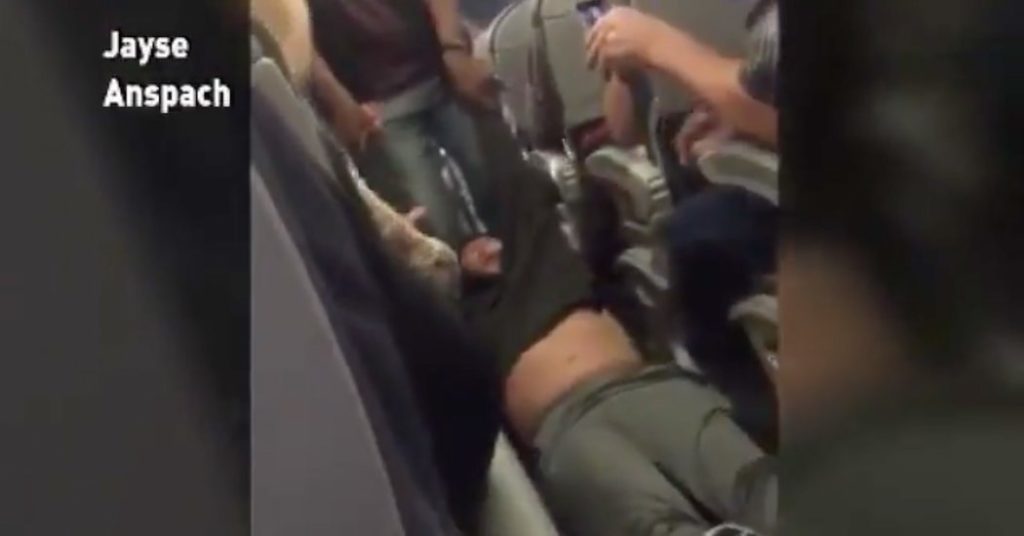 The disturbing scene captured on cellphone videos by United Airlines passengers on Sunday went beyond the typical nightmares of travelers on an overbooked flight.

An unidentified man who refused to be bumped from a plane screamed as a security officer wrestled him out of his seat and dragged him down the aisle by his arms. His glasses slid down his face, and his shirt rose above his midriff as uniformed officers followed.

At least two passengers documented the physical confrontation and the man’s anguished protests, and their videos spread rapidly online on Monday as people criticized the airline’s tactics. A security officer involved in the episode has been placed on leave, the authorities said, and the federal Transportation Department is investigating whether the airline complied with rules regarding overbooking.

Tyler Bridges, a passenger on Sunday’s flight who posted a video to Twitter, said in a telephone interview on Monday that “it felt like something the world needed to see.”

The shocking scene raised questions about the common practice of overbooking and how far airlines will go to sell all of their seats. Particularly annoying, Mr. Bridges said, was that the airline was looking for extra seats for some of its employees.

The videos show a security officer removing the unidentified man from his seat and dragging him off the plane as he screams. The flight was scheduled to depart O’Hare International Airport in Chicago for Louisville, Ky., at 5:40 p.m. but was delayed two hours.

Charlie Hobart, a United spokesman, said in a telephone interview on Monday that “we had asked several times, politely,” for the man to give up his seat before force was used.

“We had a customer who refused to leave the aircraft,” he said. “We have a number of customers on board that aircraft, and they want to get to their destination on time and safely, and we want to work to get them there.

“Since that customer refused to leave the aircraft, we had to call” the police, and they came on board, he said.

The Chicago Department of Aviation said in a statement on Monday that the incident “was not in accordance with our standard operating procedure” and that an officer had been placed on leave pending a review of the matter. The department declined to identify the officer.

Airlines routinely sell tickets to more people than the plane can seat, counting on several people not to arrive. When there are not enough no-shows, airlines first try to offer rewards to customers willing to reschedule their plans, usually in the form of travel vouchers, gift cards or cash. The arrangement — which is usually negotiated before passengers board the plane — can be lucrative to flexible travelers and is crucial for airlines to maximize profit.